What are you passionate about? Whatever it is, do it, talk about it, grow it, share it, seek out collaboration or guidance or mentorship from one or more people who are further along than you or are already an expert.

If or when a passion fades, loses relevance, or is outgrown, consider moving on to the next one. Maybe you dabble in a hobby or interest on the side for years, or maybe you set yourself up to make a very abrupt change into a new field or interest. Whatever you choose; it’s your life and your decision… own it!

“I wish I’d had the courage to express my feelings,” is one of the top five regrets of the dying — a sentiment that hints at the fact that people wish they’d spent less time talking about the weather and more time delving into what it is that makes their heart swell.

Nothing wrong with shootin’ the you-know-what every now and then, but sitting down to talk about what makes you tick is a prime practice for feeling good about life. A study published in Psychological Science found that those who take part in more substantive conversation and less trivial chit chat experienced more feelings of satisfaction. 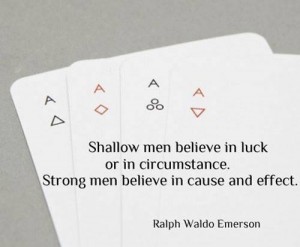 This one is a little bit longer – about 5 pages – but I think the length is not just “filler” and that it covers a very useful concept. ymmv

” ‘Which story do you prefer?’ This question turns out to matter a great deal if you are trying to figure out who grows after trauma and who gets swallowed up by it, a question that each movie addresses and that psychologists have been grappling with for years. Think back to the last time you experienced a loss, setback, or hardship. Did you respond by venting, ruminating, and dwelling on the disappointment, or did you look for a faint flash of meaning through all of the darkness — a silver lining of some sort? How quickly did you bounce back — how resilient are you?
…
Far from being delusional or faith-based, having a positive outlook in difficult circumstances is not only an important predictor of resilience — how quickly people recover from adversity — but it is the most important predictor of it. People who are resilient tend to be more positive and optimistic compared to less-resilient folks; they are better able to regulate their emotions; and they are able to maintain their optimism through the most trying circumstances.
…
For many years, psychologists, following Freud, thought that people simply needed to express their anger and anxiety — blow off some steam — to be happier. But this is wrong…. another study found that facing down adversity by venting — hitting a punching bag or being vengeful toward someone who makes you angry — actually leads to people feeling far worse, not better. Actually, doing nothing at all in response to anger was more effective than expressing the anger in these destructive ways.”